If you’ve gotten behind in paying your bills or a creditor’s records mistakenly make it appear that you are behind, there’s a good chance your debt will be turned over to a debt collector. This classroom goes over your rights as a consumer when dealing with debt collectors, including how to make them stop contacting you and what to do if you disagree with the debt.

Dealing with Debt Collectors: Disputing and Verifying a Debt

Under the FDCPA, your right to dispute the debt has three separate parts:

The dispute and verification process is designed to provide you with accurate information about your debt, so that you have the information you need to decide what to do.  There is no reason to give money to a debt collector who can’t or won’t provide you with this information.  This is why even if you think you might owe the money, you probably want to dispute the debt.

Disputing and Verifying the Debt

If you want to dispute the debt, put your dispute in writing, and send it within 30 days of first receiving the “validation notice” described above.  If you do not act within that period, the debt collector does not have to provide verification, and more important, the debt collector may “assume” the debt is valid.

The Dispute and Verify Letter

A sample dispute letter is provided below, under “Related Resources.” Fill in the blanks with the information about you, the debt collector and the debt. 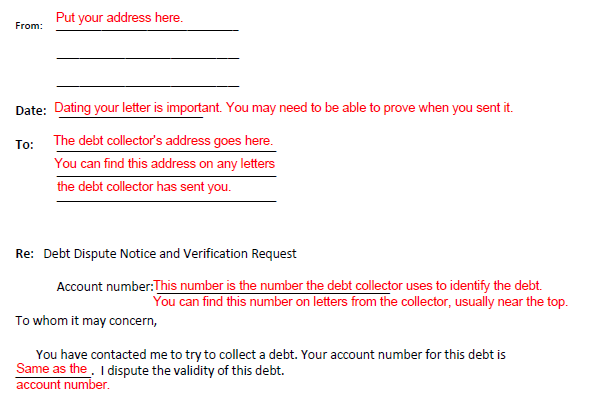 In the letter, you can ask the debt collector why it thinks you owe the debt, and you can ask for details about the debt collector’s authority to collect the debt.  You can ask for a complete accounting of the original debt, including information about payments made and interest and fees charged and/or waived.  If you are disputing the debt on grounds of identity theft or mistaken identify, verification should include a copy of the original signed contract or note.

You can also use the debt verification letter to request that the debt collector have no further contact with you other than to send you the verification you requested, tell you when collection efforts stop, or tell you when they are filing suit. See the section in this classroom on “Stopping All Collection Contacts” for more information about stopping contact.

The sample letter provided includes all of these.  It asks for specific information about the debt, includes the statement about credit reporting, and also asks that the debt collector have no further contact other than sending the verification.  You can change the letter to meet your needs, if, for example, you want to ask for more information, or you want to have contact after receiving the verification. This is what it says:

Before you send your letter, make at least one copy for yourself and keep it in a safe place.  Send the letter certified mail, return receipt requested, so that you can prove the debt collector received the letter.  The receipt will come back to you.  Keep the receipt with your copy of the letter.  These may be important later, especially if you have to go to court.

What if more than 30 days have passed since receiving the initial notice?

If more than 30 days have passed since you received the initial notice, you can still dispute the debt.  But, the debt collector will be allowed to continue debt collection activities and will not have to verify the debt.  Still, if you have a good defense to the debt, you might want to dispute it.  Send your dispute in writing, and include any evidence that supports your claims, such as copies of cancelled checks that show you paid the debt, or a police report in the case of identity theft.  If the debt collector knows that you don’t owe the money, it should not try to collect the debt.  The FDCPA prohibits debt collectors from making false statements about the character, amount of legal status of your debt.

What if I don’t dispute the debt?

If the debt collector sues you for the debt in the future, they will still have to prove to the court that you owe the debt whether you asked for validation for not.

If the Debt Collector Ignores Your Dispute

When the debt collector gets your debt dispute letter, they must stop trying to collect the debt. They have to respond to your dispute by providing debt verification in writing before they can start trying to collect the debt again.  If the debt collector contacts you before verifying the debt, keep a record of any contacts.  You can file a complaint with the Alaska Attorney General’s office Consumer Protection Unit, http://www.law.state.ak.us/department/civil/consumer/cp_complaint.htmlor you can file a complaint with the Federal Trade Commission by calling 1-877-382-4357, or online at www.ftc.gov.   You can also contact an attorney – the debt collector may have broken the law and you may be able to sue them.

Alaska Legal Services Corporation wants to hear from you about the legal needs in your community.

Go to the Survey

We have forms available to help you solve your legal issues.

All in-person legal clinics are temporarily suspended due to COVID-19.

We are working to find alternative methods to hold these clinics and will update our calendar when that information is available.

You can view our clinic calendar at alsc-law.org